Joerg Hampel is a guest blogger. As the owner of Hampel Software Engineering and CLA and LabVIEW Champion, his biggest interest lies in team development best practices.
Ever wanted to use the API of a software module in an application when the module itself is actually running in another application on another device, connected via network? No? Well, imagine these scenarios:

One of the three pillars of my company‘s business is using LabVIEW Real-Time and LabVIEW FPGA to build embedded, network-enabled control devices and device drivers. Most of these applications tend to run as headless, stand-alone units, but all of them need configuration, visualisation or user input from time to time.
We always start out with a Real-Time application that has its own user interface for operating the application in its early stages (and even longer, sometimes). When it’s time to start developing the Windows application that should connect remotely, one often wishes to be able to reuse at least part of the code that’s already running and proved to be working. Even better than reusing would be using, right?

There is an abundance of examples where you would want or need to access a shared resource remotely:

In all of these cases, wouldn’t it be great if you didn’t have to worry about where the functionality will be executed? Wouldn’t it be great to just drop the DQMH requests into your block diagram and just use the module’s functions?

use the API of a DQMH module even if the module itself is running on a different, distributed system

The DQMH Generic Networking Module is a DQMH Singleton module altered to allow for (near) zero-coupled networking functionality. The motivation behind this implementation is to use the API of a DQMH module even if the module itself is running on a different, distributed system. Both the caller and the callee are absolutely oblivious of whether they are running on the same or on different systems.

In order to be able to communicate in a generic way, we need to separate the message data and its type information from the framework’s communication mechanisms. This allows us to send and receive messages without knowing about their actual contents, and that’s the prerequisite for separating the module’s actual use code from the networking code.
All notifications for requests are changed to variant datatype. This allows for generic access to the notifier reference. The actual datatype of the event’s notification lives inside the variant. 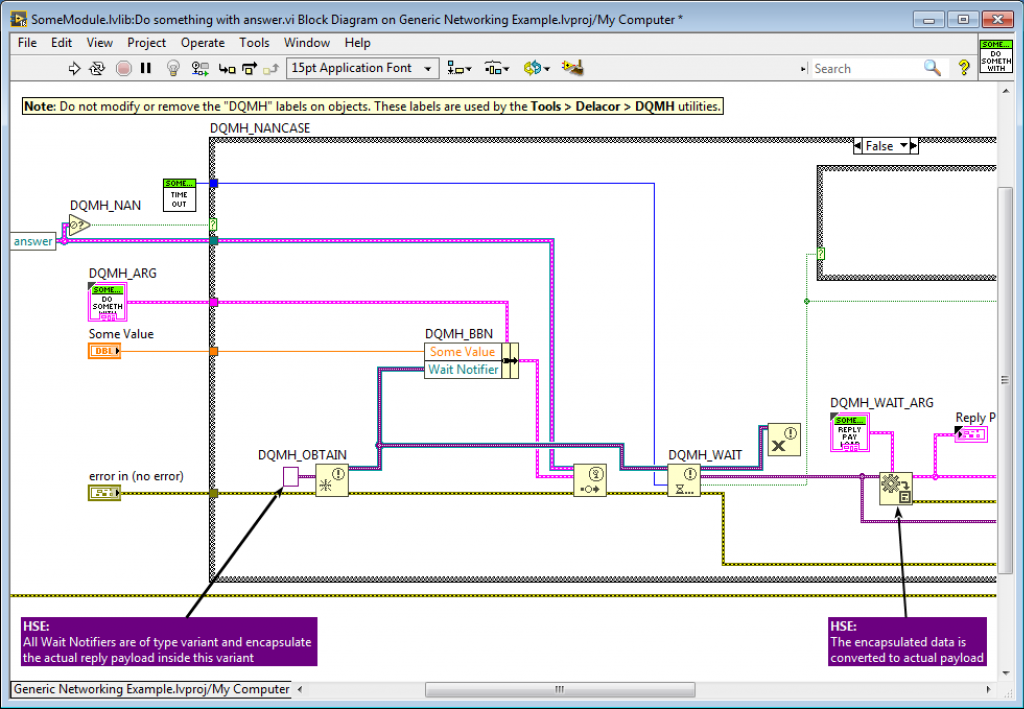 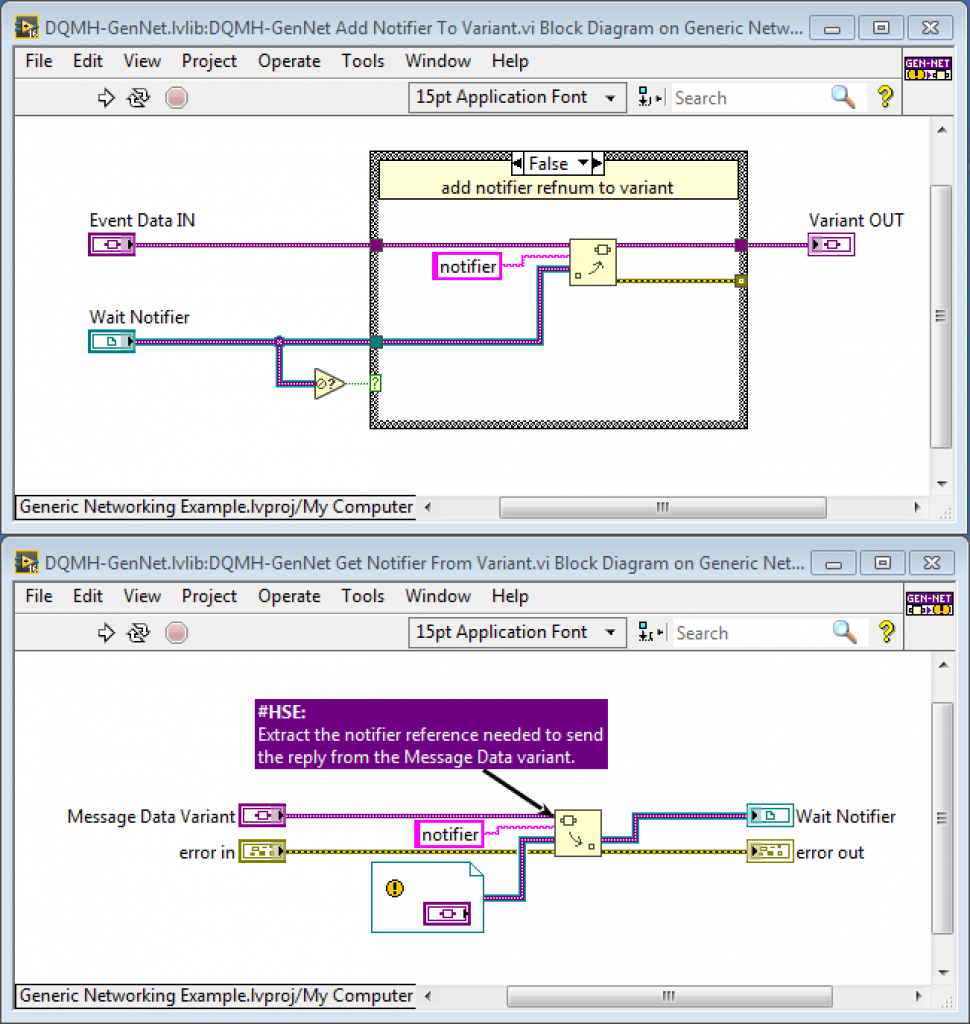 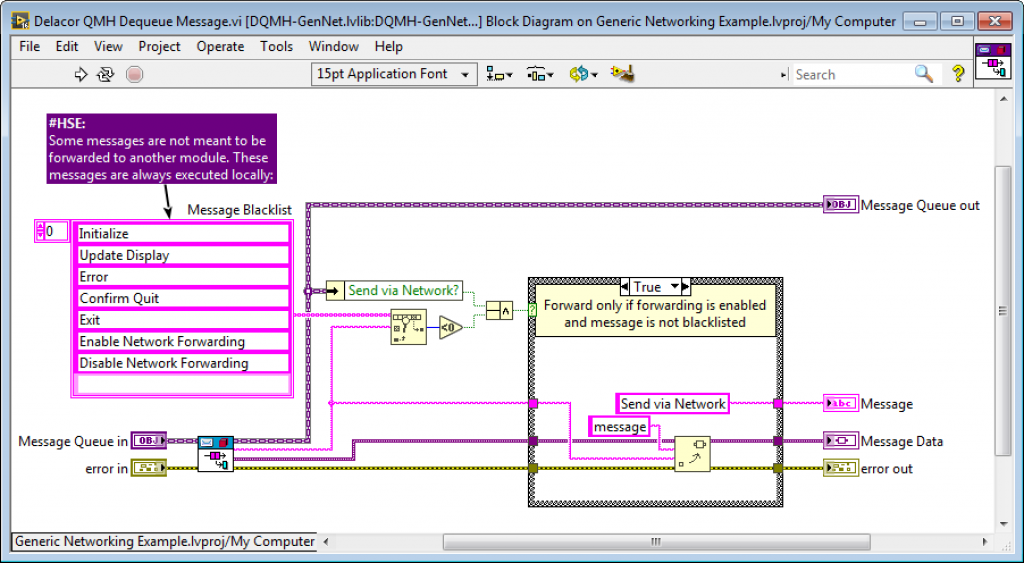 A DQMH Generic Networking module doesn’t have to know about how its messages are forwarded, received or answered.
When configured to forward requests, it dynamically loads a NET-TX clone module, which handles the actual forwarding: 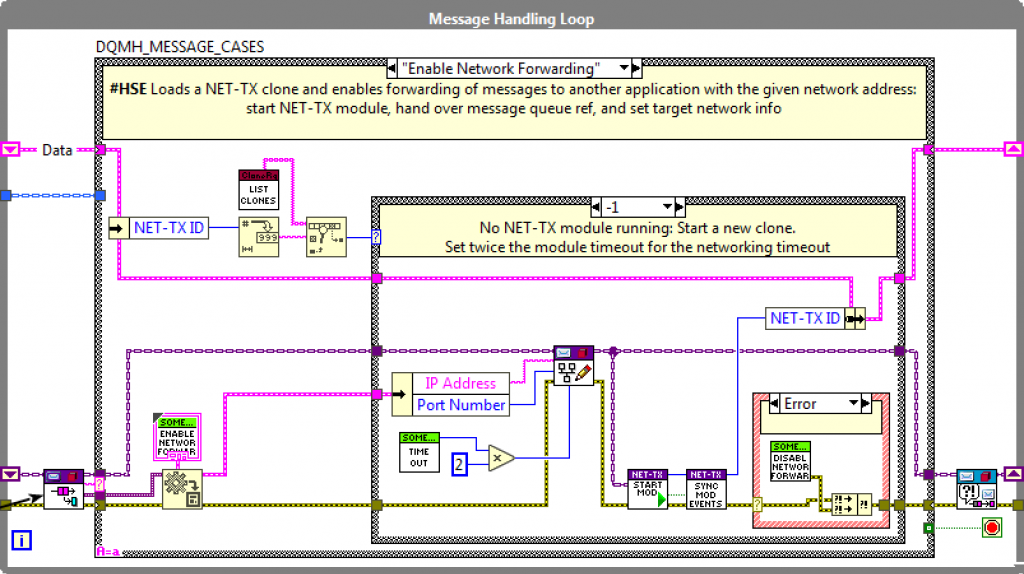 When configured to receive remote requests, it dynamically loads a NET-RX module, which takes care of receiving messages and forwarding them to the module itself: 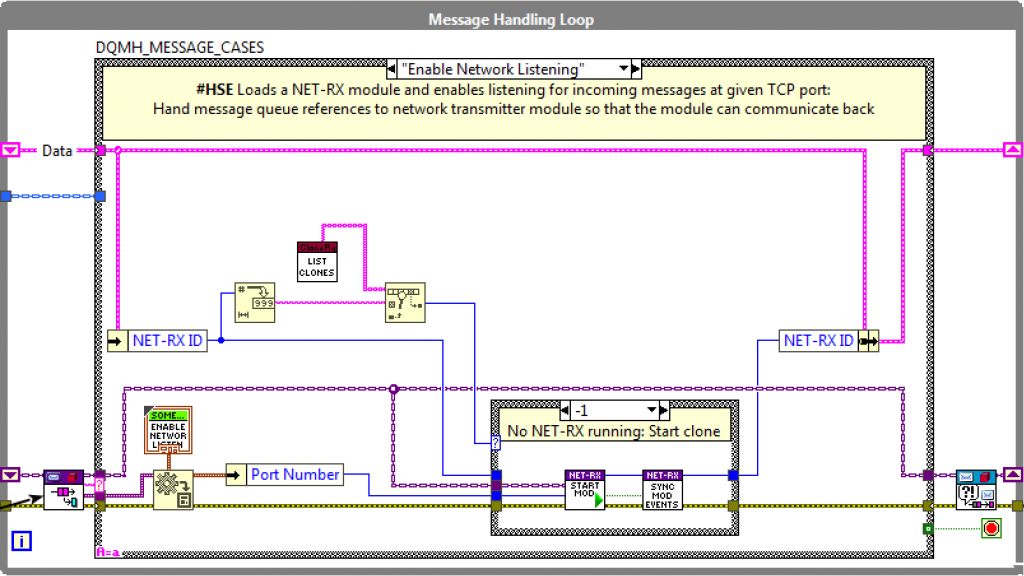 For the following description, let’s imagine we have to talk to a database. We assume that we have two applications: One application is running locally, the other remotely (on another computer), and they are connected to each other via TCP. Only the remote application has access to the database, the local application cannot reach it due to network limitations.
Both applications make use of the same DQMH database module (DB module), but they use it differently: 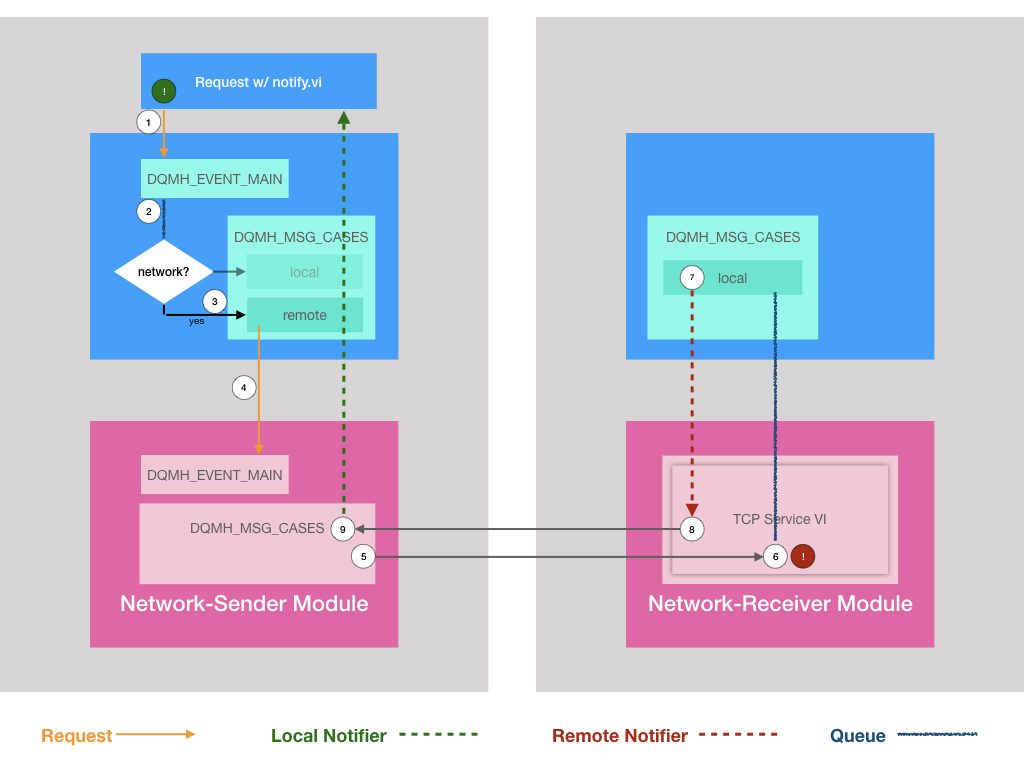 Where to go from here?

If you want to give it a try yourself, you can find the source code on gitlab.com. Pull the repo, check out the example, and be sure to let me know what went well for you and what not so much. Just be aware that this is still a work-in-progress. The code is based on DQMH 4.0, so don’t forget to update your DQMH to the latest version if you haven’t done so already.
“Generic Networking Singleton Module” https://gitlab.com/hampel-soft/dqmh
I’m also very much looking forward to hearing other people’s thoughts on the whole idea and on our implementation so far. So please feel free to leave your feedback in the comments section or contact me directly at joerg@hampel-soft.com. I’d really appreciate it.
Happy generic networking,
Joerg Hampel